Warning: A non-numeric value encountered in /home/lewesqua/public_html/wp-content/themes/Divi-2/functions.php on line 5760 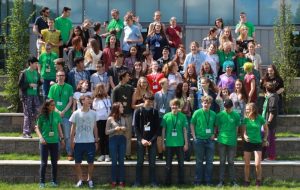 Ella and I attended Junior Yearly Meeting as the representatives of East Sussex at the end of July this year. Ella was also a Base Group Facilitator and part of organising Junior Yearly Meeting. We were grateful to Local and Area meeting for their support in enabling us to attend. Thanks especially to Sue for being our adult contact and to Tess, Helen and John for lifts there and back.

Our theme was “How can we work with others to make a difference?” and we explored this through many speaker sessions and activities.  We especially enjoyed Sam Walton’s talk on direct action because it provided a new perspective on activism. He described breaking in to a British military air base to attempt to disarm an aeroplane carrying arms to bomb the Yemen and a recent attempted citizen’s arrest of Saudi Arabian war criminal, Ahmed Asiri.

Tim Gee discussed some of the flaws of British Quakers and how we can adapt and change in his Gorman Lecture, bringing up interesting facts such as Quakers being less ethnically diverse than UKIP. This talk conjured many questions such as “Is Quakers just being accepting of others enough to insure diversity within our meetings?”.

Catherine West, who delivered the Swarthmore Lecture, facilitated a vocal parliamentary-style debate on votes at 16. We considered how this might help young people take action but recognised the polarity of opinion.

We also took part in many fun activities, such as “hunt the Quaker” which saw JYM and the Young People’s Programme join together to find adult volunteers across campus in a variety of costumes. Base groups were another opportunity to meet people, form friendships, and have a sense of togetherness.

We really enjoyed exploring our Quakerism and meeting fellow young Quakers, who we continue to stay in touch with. We thank the meeting for funding and support to go to JYM and other young Quaker events.